Digital Signing Solution- What Is It & How Will It Benefit My Business?

e-Invoicing Under GST: Role of Chartered Accountants If Their Clients Ask For It 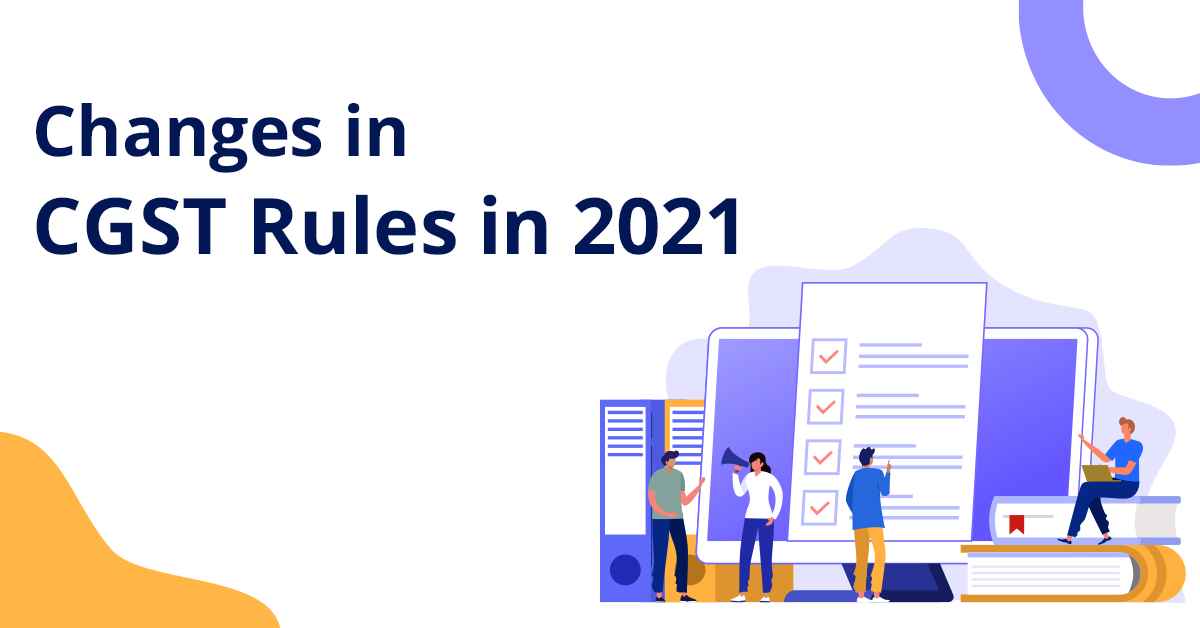 Central government is empowered to make or amend rule, whether on recommendation of GST council or otherwise, under section 164 of the (CGST Rules)Central Goods and Service Tax Act, 2017.

In accordance with this power, on recommendation of GST Council, Central government on 22nd December 2020, vide notification no. 94/2020, hereby made following rules to amend Central Goods and Service Tax Rules, 2017.

These rules may be called as Central Goods and Service Tax (Fourteenth Amendment) Rules, 2020. 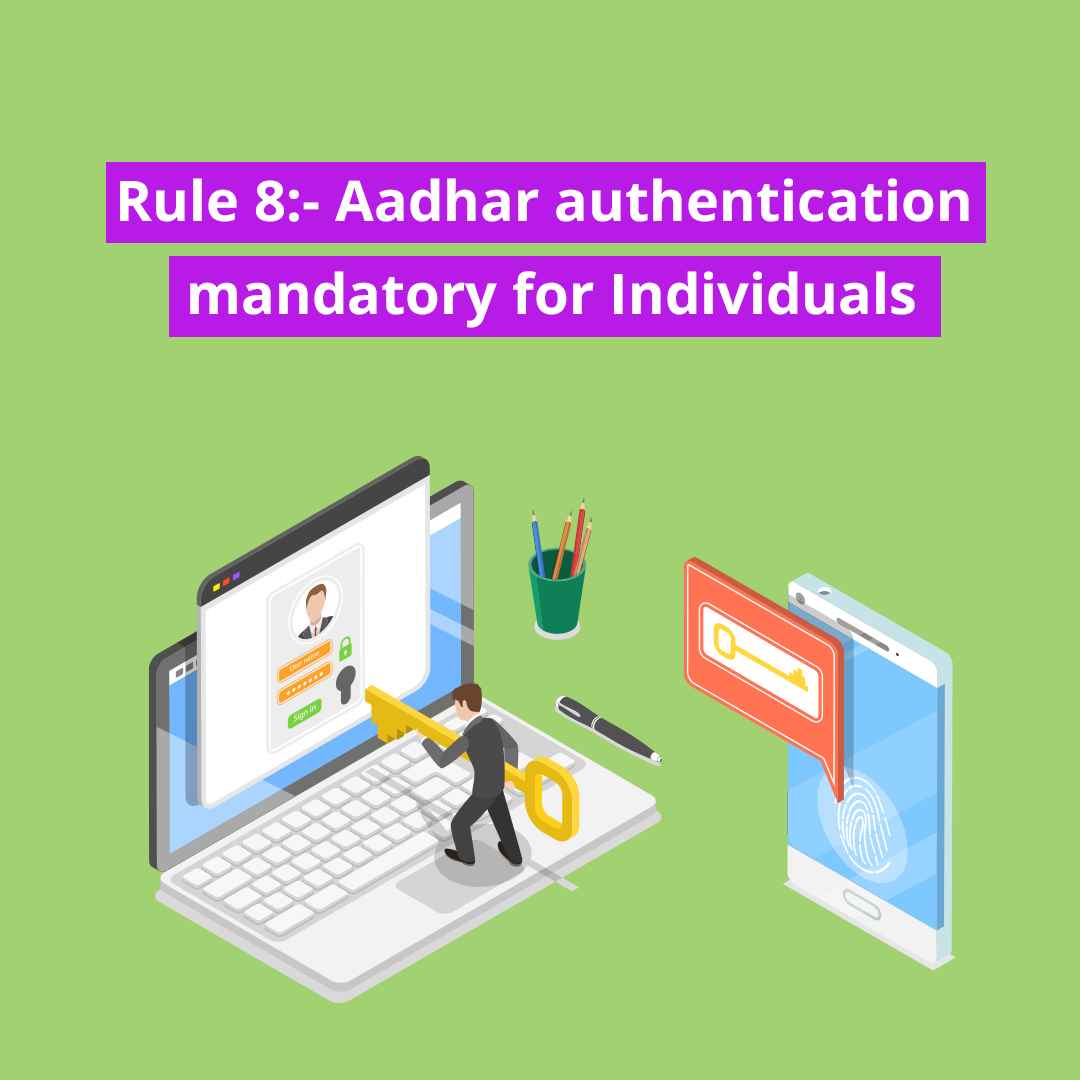 In Rule 8 of Central Goods and Service Tax rules, sub-rule 4A has been substituted.

This amendment says that every individual applicant or individuals like partner or director of the firm or company being the applicant, have to mandatorily get their Aadhar authentication done by application made under Rule 4 in FORM GST REG-01.

Applicant has to upload the original copy of documents from one of the Aadhar facilitation centre notified by the commissioner.

Applicant has to do its biometric-based Aadhar authentication along with photographs and KYC, unless exempted under section 25 (6D).

This amendment says that earlier registration on application based on Aadhar authentication were granted within three working days, otherwise it was treated as deemed registration, will now be granted in seven working days.

If a person, other than a person notified under section 25(6D), does not go under Aadhaar authentication or fails to undergo Aadhar authentication, the proper officer with the approval of an officer authorised by the Commissioner not below the rank of Assistant Commissioner, may carry out the physical verification of his Place of Business if he deems fit, and grant or reject the registration or  within 30 working days after completion of verification.

If the proper officer fails to take appropriate action within 7 working days from 7/30 working days, as the case may be, the registration shall be treated as deemed registration. 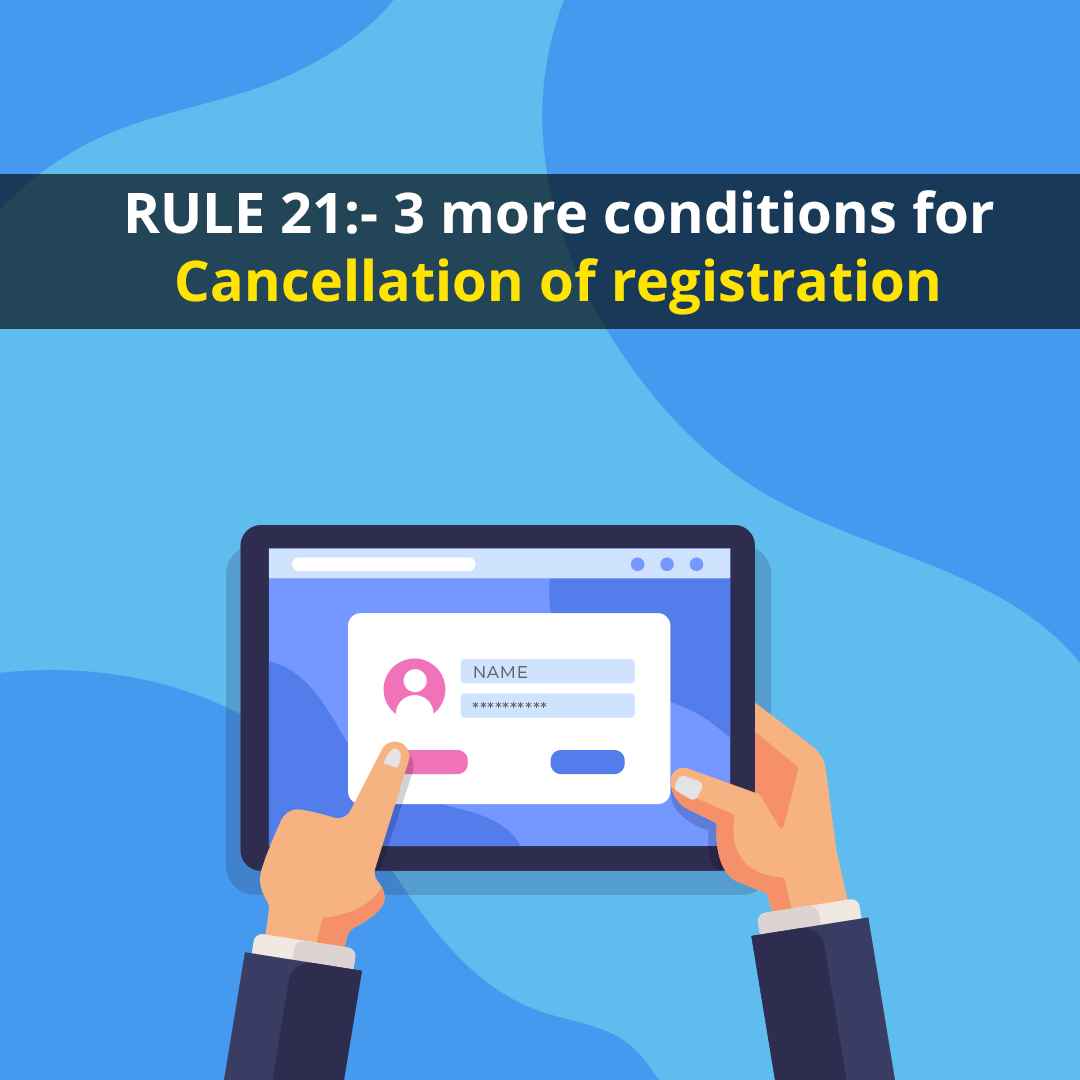 (e) If the registered person avails excess ITC than it is allowed in section 16 or rules thereunder.

(f) If he shows excess output tax liability in Form GSTR-01 than its valid return under section 37 for one or more tax period.

(g) Violates provision of rule 86B which says “The registered person cannot utilise amount available in Electronic credit ledger towards payment of output tax liability in excess of Ninety-Nine percent of such output tax liability, in cases where value of taxable supply exceeds Rs Fifty Lakhs in a month, other than exempt supply and zero-rated supply.

RULE 21A: - No Opportunity of being heard before suspension of registration

As per this rule, following changes have been made:

Before cancellation of registration, the registered person shall NOT be given any OPPORTUNITY OF BEING HEARD.

If Proper officer finds any difference in output tax liability in his Form GSTR-1 and as shown by his supplier which leads to cancellation of his registration, then his registration will be suspended. In this case, the said person shall be intimated under FORM GST REG-31, electronically or sending an e-mail registered on the portal.

Also, during suspension period, if a person is having any refund due, such refund shall also stands blocked for that period.

Such suspension of registration can be revoked by proper officer at any time during pendency of proceeding, as he deems fit.

This shows clearly that government is being sterner towards the taxpayers in respect to ITC availment.

Sub-rule (5) has been inserted after sub-rule (4), which says that,

If a registered person, does not upload form GSTR-3B for two preceding months in case of monthly returns, or one tax period preceding current tax period, he shall not be eligible to file GSTR-1.

As per this sub-rule, government is imposing compulsion regarding filing of GSTR-3B. Earlier taxpayers used to file GSTR-1 to show their output tax which would help the buyer to claim ITC, but they do not file GSTR-3B. And for payment of tax, a taxpayer has to file GSTR-3B.

So, if the taxpayer fails to file GSTR-3B for two preceding months in case of monthly return and one tax period in case of quarterly return, he will not be allowed to file GSTR-1 for current month.

Rule 86B: - Utilisation of ITC up to 99% of output tax liability

The following rule shall be inserted after rule 86A. This rule became applicable with effect from the 1st day of January, 2021: -

The registered person cannot utilise amount available in its electronic credit ledger, more than ninety-nine percent of his output tax liability. This rule is applicable if the value of taxable supply, other than exempt supply and zero-rated supply in a month exceeds fifty lakh rupees.

This means even if he has balance in electronic credit ledger, he will not be able to utilise it, and will have to add at least one percent of output tax liability to his electronic cash ledger from his pocket.

This restriction is not applicable to certain specified taxpayers mentioned above.

For every 200 kilometres or part thereof THEREAFTER, one additional day shall be allowed.

This rule is not applicable in case of Over Dimensional Cargo or multimodal shipment in which at least one leg involves transport by ship.

I hope this article was helpful which explains all the amendments under CGST Rules vide notification no. 94/2020.

Hema is a Chartered Accountant who is having about Eight years of experience in taxation and accounting. She is in practicing as a Chartered Accountant since 2020. She is a writer by passion and thus shares her experience and knowledge through her articles at various platform.Predominantly her area of interest is GST. Since GST is a very new concept for India, every practitioner is looking for clarity in this area. She likes to share her experience with everyone and therefore tries to put them in form of articles. Apart from this, she is also well-worsed in Financial market.